Zero Hour features the all new Generals Challenge mode, in this mode you will battle 9 AI computer controlled Generals. Each time you beat one of them, you’ll be able to take that force online against other players. These challenges are definitely meant to test your skills so some research about these Generals will be needed. This is an overview of the new Generals.

The son of an Iowa crop duster, General Malcolm Granger’s flying career began at the age of 12, when he borrowed his father’s biplane to go to the state fair in Kansas City. As a lieutenant in the Vietnam War, Granger became an ace in a single afternoon, knocking out four MiG-17s over Da Nang. As he moved up the Air Force ranks, Granger earned a reputation for advancing the role of fighting aircraft in the U.S. military. Even-tempered yet uncompromising, Granger has developed novel techniques in fuel management and resource deployment during air superiority operations. Those techniques have been used with success in Iraq, Afghanistan, and other theatres. His squadrons are known for precision execution and a strong will to complete the mission.

A logistics staffer in Okinawa, Alexander attracted the notice of her superiors with her ability to acquire just about anything. Alexander parleyed that ability into a scholarship and a long and distinguished career in the Marines. To protect supply lines during the first GLA conflict, Alexander developed a tiered scheme of defenses that did not allow a single strike on any of her supply columns. While hardly efficient in her use of resources, General Alexander makes defense and resource acquisition priorities in the early phases of conflict. The general’s army takes to the offensive only when she has superior offensive fire-power that cannot be touched by counter-attack.

An early champion of laser technology in the USA Armed Forces, “Pinpoint” Townes has developed comprehensive offensive and defensive strategies for the 21st century around laser-based weapons. It is only in recent years that powerful lasers became cheap enough and light enough to mount on battlefield weapons, and General Townes has deployed them throughout his forces. This four-star general continues to push the technology envelope in harnessing energy and improving power efficiency, and the Army is counting heavily on him.

On the battlefield, China’s greatest resource is the millions of individuals in uniform, and General Shin has staked a career on them. Known to his troopers as The Anvil, General Shin can mobilize four divisions in twenty-four hours thanks to a streamlined, and sometimes brutal, command structure. Discipline is very strong with General Shin, and officers and infantry who can maintain it are rewarded. The General has developed advanced field training programs for the Red Guard and elite operatives. Military analysts credit the speed and professionalism of General Shin’s peacekeeping units with preventing the Taiwan Conflict of 2018 from becoming a global war. His divisions feature several weapons and transport systems unique in the People’s Liberation Army.

General Tsing gets what he wants, at any cost. Impatient to a fault, General Tsing relies heavily on nuclear technology on the battlefield. Unfortunately, there have been several terrible accidents. While General Tsing was the responsible officer during the Mudanjiang Disaster of 2014, his considerable talents saved his career. General Tsing believes such trials and errors are part of the development process. His divisions are beginning to see the results of his convictions, as a prototype of an advanced nuclear power plant has produced better results. Programs to develop tactical nukes and to promote stability in radioactive isotopes are producing better safety records, which will be well-received by his troops.

General Ta Hun Kwai is convinced that the People’s Liberation Army will see its greatest military successes in this century through the view holes of its tank divisions. A disciple of Soviet tank tactics of the Cold War, General Ta has produced technical papers on various modifications to them. He has initiated development of techniques to reduce the costs of tank production and has sponsored the Emperor program, whose first tanks rolled off the assembly line in 2019. Considered part of the old guard in the PLA hierarchy, General Ta nevertheless continues to roll up victory after victory in battle.

Little is known about the GLA associate codenamed, “Dr. Thrax.” While background intelligence indicates that he received training as an immunologist in Jordan, he left academics in 1995 and disappeared into a GLA-controlled ghetto in Cairo. For the past twenty years, he has produced chemical and biological weapons for terrorist organizations across the globe, including the GLA. Recent eavesdropping on cell phone traffic indicates that Dr. Thrax has become more involved in day-to-day operations of the GLA. He has scattered labs across Asia and the Middle East, where low-cost WMDs are produced and distributed to local terrorist cells. A cautious and scientific personality, Dr. Thrax never sleeps in the same bed two nights in a row and undergoes frequent cosmetic surgery to alter his appearance. 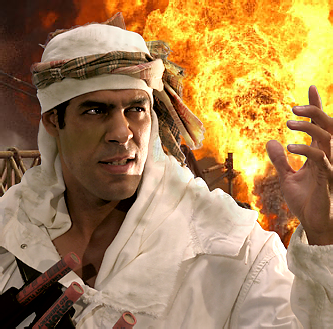 This bomb-maker of Middle Eastern ancestry is responsible for some of the most devastating terrorist attacks of the twenty-first century. General Juhziz and his organization have been tied to both the attack on the US Embassy in Cairo and the sinking of the USS Nelsen in 2012. Such bold strikes have drawn more supporters to his side, including bombers from many nations willing to sacrifice their lives for the causes of the GLA. General Juhziz lost the use of a hand in a bomb-making accident and rarely speaks to anyone outside of his own organization.

Prince Kassad has cut a dashing figure across Middle Eastern politics and a violent one in the underworld. This charismatic tribal leader has organized spies and assassins across North Africa to do his bidding. Prince Kassad has been paid millions for assassinations, hijackings, and beatings in the street. For a three-year stretch beginning in 2008, it is believed that no terrorist action was taken on the shores of the Mediterranean Sea without his involvement or blessing. A clever administrator of a serpentine organization, he has never been directly tied to any criminal activity, yet bad things continue to happen to individuals and forces that stand in his way.

As a member of the PLA’s Elite Forces, Leang is a flexible commander, leading a mixed military force that brings together the best infantry, vehicles, defensive structures and special forces operatives from the entire world. Her arsenal includes American troops, Chinese tanks, GLA guerillas and superweapons from all factions.