Command & Conquer, one of the biggest and longest running franchises in gaming history. With a grand legacy, and a cult following, there is bound to be something about your favourite franchise that you don’t know. So we have collected some Command & Conquer trivia right here on this page. Featuring small tidbits, covers, manuals, inside errors or possible easter eggs from many of the Command & Conquer games. Thanks to Plokite_Wolf for collecting these. All of them were originally posted in this thread on forums during May/June/July 2013.

When looked at closely, Kane’s mask has a reflection with Westwood’s original Tiberian Sun render of CABAL, albeit without the logical side flip.

The walker seen in the first 1995 trailer for Tiberian Sun is often believed to be the first Wolverine. However, it turns out that it barely fits the description of a walker – it is only tall enough to host a pilot, but not a full control cabin like its successors in the Second Tiberium War.

The X-O Powersuit is just that – a powersuit. It can be compared with the Third Tiberium War zone troopers and zone raiders, which, surprisingly, have similar armament in terms of fire-power. The X-O Powersuit used a laser weapon, which was the first and only known usage of laser technology by GDI, and which was field-tested to demolish a Humvee in a single shot. The zone troopers use a rail-gun, while the zone raiders use sonic grenades to counter enemy armour. Also, the Wolverine has both “arms” armed with machine-guns, while the X-O Powersuit only has one (the left).

The X-O Powersuit was also planned to be used in para-drops, meaning that they were used in infantry battalions, while its successors had vehicle status. The Wolverines required a more stable deployment through Orca Carry-alls and V-35 Ox transports.

Idrachod2 has uploaded a very rare trailer of Command & Conquer from January 1995 to YouTube. What makes this trailer so special is the following:

Most of you will likely recognize this song – it is Destructible Times by the band I AM, which, in a shortened remix, appeared in all four Command & Conquer Nod credits videos. Frank Klepacki was the drummer in the band at the time and still supports the band through his website (see his store for the shirt saying I live in destructable times) even though they disbanded in 1995, not long after they released their album There’s A Home, from which Destructible Times was extracted. Westwood asked Klepacki for the song because it “reflected the war aspect and bad-ass vibe of Nod’s side”.

However, according to Law360.com, Greg Greer, the band’s vocal, sued EA for using the song in 2010, but lost the lawsuit in 2012, (Klepacki permitted the song’s use in 1995!) As it turns out, Westwood did not make a copyright infringing move. Strangely, Klepacki no longer has the band’s songs in his Listen page (ex-Jukebox) except for a 51-second sample of Destructible Times as it appeared in Tiberian Dawn.

Believe it or not, this entry will not cover German censorship that much – because RA2 is so far the only C&C game not to be censored by the infamous BPjS. Seen below is the German gameplay of the first Soviet mission where you can see Conscripts firing on civilians (03:02) – something that led the first German release of Generals to be banned.

Who censored RA2 and YR and why? The United States! Red Alert 2 was good for its first year of shelf life, but after September 11th, 2001, Westwood decided to censor the front cover of the game not to reveal the American flag in Volkov’s eyepiece or the demolished buildings. This change was introduced in re-releases and the Red Strike pack (the 2002 RA2+YR bundle box).

This is best seen in Yuri’s Revenge. The game was scheduled to be released in September 2001, but the mentioned 9/11 event got the team to think – they were on the fringe of cancelling the game fully, but in the end, they released the game with altered art. However, certain boxes with the original art made it to the public, for instance the Russian-localized version.

You may have seen the beta shots of RA2 (if not, though, click here). You may have also seen concept art for cut units. But did you know that some of the cut units made it to the game’s cut-scenes?

This is the Corkscrew Transport. The original concept art suggests it was an Allied unit, but the intro video displays it along with the Soviet arsenal. Only one screenshot reveals this unit, with a crop here:

This WIP render hosts Dreadnoughts and Typhoon Subs. Among them is a tiny unit that is logged as the Hydrofoil, which is barely noticeable in the final video, as the missile launches do not permit you to take notice of it. You can see two of them in this screenshot, both on the Allied and the Soviet side.

However, the unit is believed to be Soviet, as the Sea Scorpion, the unit that overwrote the Hydrofoil, is designated in the INI files as [HYD].

One of Joe Kucan’s brothers, Daniel Kucan, has appeared three times in C&C games. First, you see him as Jake McNeil from Tiberian Sun…

..and here he is playing Joshua “Mitch” Mitchell, the founder of Steel Talons, in Kane’s Wrath. He also played his namesake Daniel in the 1997 Lands of Lore: Guardians of Destiny and the Fremen soldier Geisel in the 2001 Emperor: Battle for Dune.

And finally, Daniel Kucan appears briefly in the GDI ending of Tiberian Twilight as a passer whom the reporter asks for his opinion on Kane’s ascension, to which he says: Kane’s gone? Yeah, right! and walks away.

MCVs in Red Alert 2 were subject to many design changes during the development. What you see above are the partially scrapped Mega MCVs, which were supposed to deploy into a Monolithic construction yard, but only the bottom one passed the concept stage and became the Soviet MCV in the final version.

You’ll probably recognize the above sketch as the Allied MCV. And you will be only partially right. Look again and you’ll see a communist star with the CCCP sign below it and an unclear message in its flag, insinuating that this was supposed to be the Soviet MCV.

A more bizarre approach was made in Yuri’s Revenge. This is a strange compact variant of a Yuri MCV with three (!) rows of tracks and randomly placed pieces.

This one is a more sci-fi version of the Yuri MCV which was designed to… float. The pilot should’ve been in a small cabin at the very front of the vehicle – if the game mechanics were slightly more advanced, a sniper would disable this one without a problem.

This is rare footage of the August 1999 summit in Prague that was meant to advertise Tiberian Sun and let the most prominent gaming journalists (around 100 attendants) try the game out two weeks before the international release.

The attendants were divided into “GDI and Nod sections” of an abandoned Czechoslovakian military base – each section had its tents, and the gang was welcome to play paint-ball against the self-proclaimed good guys or the sacred Brotherhood. Even tanks were employed for pyrotechnical effects… 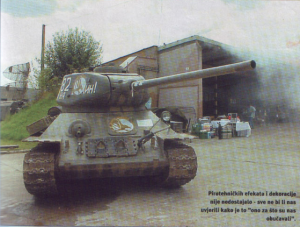 If you would like some more info and images on this, you’re welcome to download this small package of all four pages of the TS summit coverage in the defunct Croatian magazine “Hacker” (although 1999 was their prime).

A German crossover band, Think About Mutation (or [[tam]] for short), made a cover of the song “Two Tribes” by Frankie Goes To Hollywood. In light of their privilege to be among the first 200 to play Tiberian Sun in Germany, they decided to incorporate game footage and the helmet from the game cover to the official music video and the single cover art seen below. Curiously, the album “High Life”, from which the song is taken, was their last.