Q: What are your responsibilities on the Renegade project?
I’m sort of a hub, making sure the various elements of the production process come together as planned. I schedule meetings, relay communication between the different departments (programmers, artists, etc.), and keep everything flowing smoothly.

Q: What’s the biggest challenge in designing Renegade?
The hardest part is adding all these cool features while staying true to the C&C universe. Sure, it may have a whole new viewpoint, but the challenge is to make it look exactly as C&C would from this new perspective. One example of this would be the animations; in C&C, troops left standing still too long would begin to do push-ups to kill time. You will see this happen in Renegade, only from a new perspective.

Q: Why wait so long since the initial debut of C&C to release a 3D-action version?
Around the time the original C&C was released, the technologies available for a 3D action game just weren’t as advanced as they are today. So we waited. Today we have games with full 3D environments doing incredible things at an incredible frame-rate. We decided it was time to go for it.

Q: What are you adding to make sure Renegade looks and feels like C&C?
It’s always the little things. Take for example the civilians in C&C, they either ran around like crazy or shot at you with a pistol. While small, they added to the overall worth of C&C. These civilians are back in Renegade, and they’ll behave in much the same way as before. Not to mention that entire cities you’ll travel through on certain missions will be full of civilians.

While there won’t be any building construction in Renegade, all the C&C buildings that you know and love are back, in full 3D. Tiberium Silos, Refineries, and Nod’s Obelisk of Light are just a few of the buildings that will make Renegade look and feel like C&C.

Q: What types of missions will Renegade players be able to look forward to?
You play out the single-player campaign as GDI, and GDI only. In one mission you’ll fly an Orca combat helicopter as you escort a GDI convoy to its secure destination. There’s a mission where you must sneak aboard a Nod cargo ship and rescue some hostages. Not to mention a flashback to the Commando mission of C&C in which you’ll head out on foot with an order to destroy Nod SAM installations to provide safety for GDI air-support.

Q: What’s the one thing you’d most like Renegade to accomplish as a game?
I want Renegade to appeal to C&C newcomers and fans of action games in general, as well as satisfy the strict demands of the current C&C fan base. I think we’re really going to surprise a lot of people with a game that is not only easy to play, but rewarding and fun at the same time. 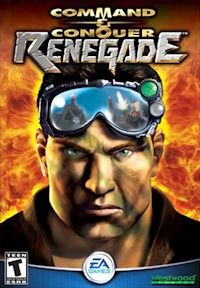