One might think not strangling one’s self with a weighted metal bar would be enough motivation, of course if it were, people wouldn’t need spotters while bench pressing. ▫ The joke at the end might be kind of lame, but obviously these guys would be the type to tell lame jokes after burning themselves with a glowing hot set of weights.

The flak trooper thinks he’s being funny. The chimp will soon prove the truth in his words.

So what are they really doing? No, it’s not just a bunch of random items that sounded funny, while I did leave it a mystery in the strip, I knew full well what their project was. They were going to climb a greased pole while wearing a weight belt with barbed wire and sharks (later a cattle prod) waiting for them to slip at the bottom. ▫ The aquatic tiberium was another reminder of the altered world in which they lived.

If you lock a wild chimpanzee inside a room, the room will almost certainly be destroyed. A “nearly” flawless plan indeed.

The GDI officer returns, not seen since #13. ▫ Looking busy on a military base is more important than actually being busy. The only thing stupider than risking one’s life toward self-improvement is doing nothing at all.

I was originally going to write that the chimp was in a tree by the arsenal dump, but I dropped this extra information as I thought it might give away the joke early. Nevertheless, that’s where the tree is.

Where would a base of little significance in the middle of nowhere be? In the tiberium universe, that could only be somewhere very cold as it is firmly established in the lore that tiberium does not grow as well in extremely cold climates. ▫ Why are they sitting outside in Antarctica? They are on extra-long guard duty, because their commander was sent to Antarctica with them.

I had wanted the Desolator to trick the conscript into dunking himself in a barrel of nuclear waste and this opportunity finally presented itself during the chimp arc. I hoped the chimp story and the Desolator being helpful would distract people just enough to forget what always happens when the Desolator gets involved. 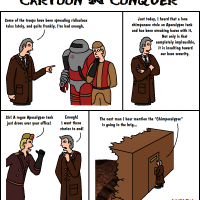 I didn’t really plan for the chimpanzee to be smart enough to drive a tank, but the more I wrote about him, the smarter he got. ▫ This issue fell one day before the third anniversary of the series, so as I was drawing it, I saved the progress at various points and used it to create the Making of Cartoon and Conquer special article.