This strip is another reminder of the universe they inhabit. I never wanted to show Nod cyborgs, as they seem to carry a more serious and grotesque undertone, but a passing reference to them kept the setting light. ▫ I had hoped that people were acquainted with the cast enough by this point that merely seeing a helmet and pack would be enough to reveal the joke, and I think it worked.

It seems a few people thought there was some sort of political commentary here and interpreted the message differently depending on their own preconceived opinions. There is no political message, it is a reference to a joke I heard that I think originated from American soldiers serving in Iraq that asked how you could find a terrorist who had infiltrated the troops, and the answer was to ask them their opinions on their situation and the one who answered positively was a spy. The morale of soldiers during war is going to pretty much invariably result in such outlooks, but that doesn’t necessarily change their allegiance. Is the last line asked because the conscript feels the same way or because the G.I. doesn’t seem very loyal? One of the above, both, it is irrelevant. 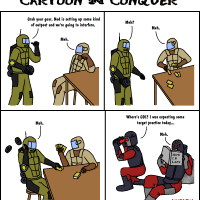 Another indicator that the enemies aren’t going to kill each other. ▫ The last line delivered by the Nod infantryman came from the third installment of The Young Indiana Jones Chronicles comic series. During World War I, due to Indiana Jones neglecting to deliver the order to advance on Fort Douaumont, the Germans were deprived from gunning down the French with one making a similar statement that always amused me. ▫ The rocket soldier starts reading his books, starting with a title written in a left aligned, abbreviated, unoriginal font, because you can’t get much lazier than that.

What is the advantage of good luck if the enemy is receiving good luck too? This is a jab at people who depend on luck to win. The superstition among a disturbingly high percentage of professional sportsmen is ridiculous.

I made a significant error while writing the script for this one, and had the engineer on Nod’s side. This is why the flame trooper seems so knowledgeable about the project and seems to be taking the leading role. I was planning on having an ion cannon strike here since I already had the Soviets detonate a nuke, so I couldn’t swap in the GDI forces, leaving me with a flame trooper talking like an engineer. 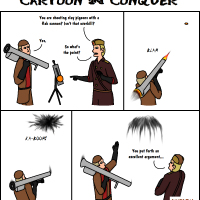 The point of this strip is the same as the reason for shooting clay pigeons with a flak cannon. Also to establish that this guy was a flak trooper, as the series never mentioned it and it isn’t completely obvious based on his uniform. 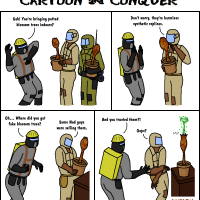 I wanted some tiberium flora, but there was no logical reason why any of the troops would approach one. The only way to place them next to a blossom tree would have to be a trick.

This strip was a reference to the flux of front lines during war. If you aren’t paying attention, you might walk in on the enemy. I also wanted to make the G.I.’s narrow opinion on the definitions of who the “good guys” are and what “liberation” means more obvious. Not everyone looking at the same thing comes away with the same perspective, and assuming your view is always right is a good way to find yourself some trouble. His stereotyping of the two sides is a constant personality trait. ▫ The door says “Ресторан”, “Restaurant”.

This strip is one of the few that note the soldiers have lives outside the military. It is also one of the few that show buildings from the games. It is the first to mention tiberium fauna (although a fiend was depicted in #3) and is the introduction to the infantryman’s quest to steal cookies. 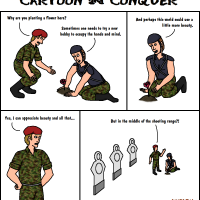 Planting a flower on a shooting range is dripping with possible political commentary. However, I only wrote it because I thought it was funny.