Someone commented on #89 that Nod could cloak, so I added the line about stealth technology being logical specifically as a response to that. Only the Black Hand have stealth suits, and there are no Black Hand in Antarctica. ▫ From this point until the end of the series, both factions will be in Madagascar, which is a blue zone and relatively clean from tiberium. 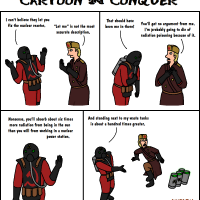 The Desolator’s statement about the sun being six times worse is true, this is average radiation absorption over a year from normal sun exposure and someone who spends all their time around a nuclear power station. The conscript’s irrational fear of radiation left him so unfocused, he unwittingly placed himself in a far more dangerous position. 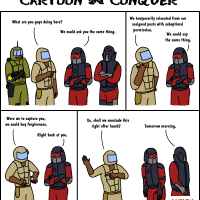 This issue also makes use of copy/pasting, but as with #20, it was intentional rather than a time saver, intended to demonstrate a lack of emotion from the Nod infantryman until the last panel. ▫ Depending on the rules established by GDI and Nod, the temporary relocation from their assigned posts with suboptimal permission may be considered desertion, which could be a very serious matter. But lunch and a good night’s rest are pretty important too. 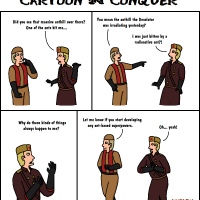 Being bitten by a radioactive ant was a Spiderman joke. That, and the Desolator causing chaos was all this strip was written for. How I managed to completely forget It Came from Red Alert until everyone started talking about it is a great mystery. Had I not forgotten it, I probably would have gone with termites. 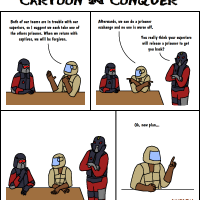 This strip used copy/pasted drafts so the characters have the same pose, but the drafts were resized before the outlining began, so the final images are not identical. ▫ This is another strip where the expression of the Nod infantryman in the third panel is really good and not at all intentional. 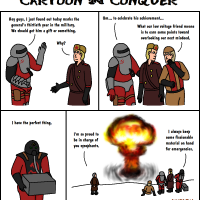 This strip was supposed to be #94, but due to time constraints and knowing the mushroom cloud would take too long, it was bumped. The script was slightly altered to adjust for the timing that no longer fit. The conscript’s question of why was originally going to be longer, complaining that the general considered him expendable due to the reactor incident. ▫ I accidentally forgot to add a label on the box the Desolator was holding which was supposed to say “подарки”, meaning “gifts”. ▫ The word sycophants caused some confusion with some people assuming it was a misspelling of psychopaths. A sycophant is basically a suck up, brownnoser, or yes man.

With all these friendly negotiations going on, one is bound to forget that they are enemies at war with each other. Luckily, the conflict ends before aggression becomes necessary. 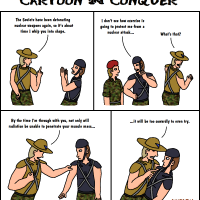 I needed to get one more Allied strip in as the final Red Alert universe strip was going to end with the Soviets. ▫ Although this seems to be the usual conflict between the G.I. and sergeant, it speaks of a new beginning, the theme the Red Alert universe concludes with in contrast to the tiberium universe going out with an ending. I didn’t want both universes to end the same way, so the war continues for the Allies and Soviets. 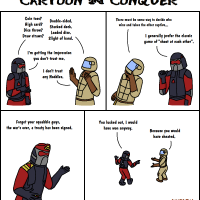 This is the semi-final tiberium strip as it is the last one to feature a punch line. The infantrymen begin walking into the distance in the last panel to signify the end of the series. 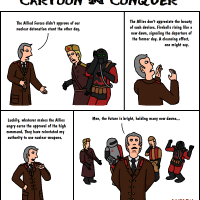 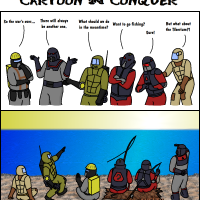 The reason why the tiberium universe gets one extra strip is so that it could complete a cycle. Cartoon and Conquer began with them fishing in contaminated waters, and ends on the same note. ▫ The flame trooper’s remark is a reflection of the games covering many different wars. The GDI infantryman’s protest is a reference to a harvester comment in Tiberium Wars. ▫ The background for the final panel was started a week before the strip was published and consisted of six layers, two layer masks, and a lot of filters. The characters, their shadows, and my signature were three more layers. I considered drawing the characters in high detail as well, but that would have taken an absurdly long time and I don’t think it would have looked right for cartoon characters.

Back to Cartoon and Conquer