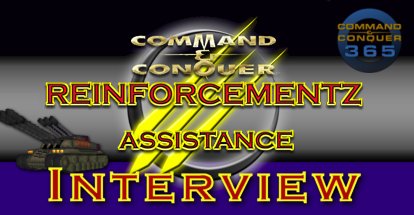 …After Yuri has been buried by try of Eagles and Reds,
with support from time trick “Chronosphere”
He has gone, but not all of him…

…Peace without maniac’s army was too short.
Fallen army has been reconstructed,
ruins and dominated British forces for a half
Eagles and Red reserves stopped them, in time.
but leaved many collapse for the conqueror…

…”Yuri cell” is what they call the fallen army.
Their late attack is not the last.
Libyan founded some kind of hell,
it is Yuri cell’s the most strongest sites.
Hard to penetrate and none can infiltrate…

…And the other side of the earth,
asian surveillance detected unseen army near Japan.
How it was there, Where it from, will it harms earth?
No one can answer…

…It is time, commander.
Time to defeat the fallen,
time to reveal the mystery from the cloud,
time to be the most dominant commander…

Dbjs2009 recently had this interview with Zenoniations, the lone person working on the Reinforcementz II Assistance Mod creating this Yuri’s Revenge mod.

Please tell us something about your self and your team as well?

About me, I’m Zenoniations. I am 19 years old (now…) and I’m from Thai (Sa-wad-dee-krup= Hello). I was interested in Yuri’s revenge modification since I was 14 years old and tried to develop my own skills about both coding and voxel making. I ever created the first public failed mod named reinforcementz v. begin. (Actually failed…)

Please tell us something about your mod?

Reinforcementz II Assistance has been in progress for about 5 years, Though early private version was not so interesting because I was new to build some good models and unbalanced gameplay. But now it have been improved, including different tactics for each nation, many tactical units, excited game mode. Those will make you enjoy this mod a lot.

What makes your mod so special? How does it compare to the other mods?

Something special about this mod? Perhaps it is unit’s design. Almost all of mechanized units was made by me, some of above is my design that was mixed and matched to support or direct combat. And These support and combat units can also be a choices for the players to choose their tactics, and exactly, they’ll have fun with it.

How did you get the idea to make such a great mod?

Mainly, an idea of this mods, including gameplay and units were from C&C Generals: Zero- Hour and it’s mods. I’m so interesting about sub-faction and much exciting units. So I tried to convert the older Yuri’s Revenge to be resembled with GNR-ZH.

What are the main goals of the mod?

The main goal of this mod is making some stuff resemble GNR-ZH + different units and strategy to the game. And the result is, a lot of fun that you all will never forget.

What are you working on right now?

Now we’re changing something to be able to run with ARES-Godsent code injector. It makes this mod able to set new fully work side “Triton” that combined all tactics in one and unique tech “Stealth system”. So you summon Spectre-72 anywhere you please, or activate Devastator solar cosmic cannon.

Do you have any future plans for your mod?

Exactly, I have planned for next mod “Reinforcementz Absolute” with 2 Original sides, 2 new faction and much more exciting features.

Have you faced any problems with in your team or the mod it self?

The main problem of mod’s is progress that took much time per addition, especially new units. Such as Pacifier tank, I made many variants to be perfect as present. And one problem is lack of time since I entered to work, and now that problem seems to be bothering me so much.

When will you release the mod?

Whoa… When I will release the mod is my happiest time. Because each stuff in this mod takes much time to be finished. And what will I have to finish before release? Original sides improvement, New side addition, Gathering bugs, Game interface modification, and release.

Are you planing for something new?

Something new, about this project? Of course, I have only a plan for something new, it is including Triton Side with ARES.

Community brings me to C&C’s arena, all of the C&C world. Though I never play with another human player, but community shares each player’s opinion, experience and we (Mod developers) known for their requirement from community, also experience can be shared by community from players/modders to modders/players. For short, community is a part of my world.

Which C&C game do you like the most? And why?

My favourite C&C game is C&C Generals: Zero-Hour. I love its few balanced units that all can be essentially use, and I love its unique capability for each sub-faction that brings me to un-rested fun time. With mods, I spend much more time to fun!!! Great C&C world ever.

Is there is any thing you want to tell the community and all the C&C fans around the world?

Ok, to community and RIIA fans (Oh…I have fans!!!). I have nothing so much to say, just you can have fun with C&C games and mods while RIIA is progressing. And…For my fans, Thanks for track this mods. I will try the best I can to release this mod.

Find out more about Reinforcementz II Assistance by visiting http://www.moddb.com/mods/reinforcementz2