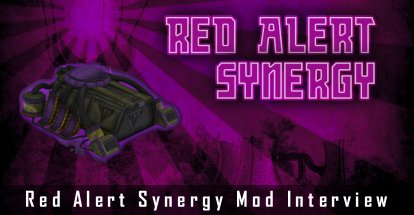 We catch up with SighNapse and R3ven from the Red Alert Synergy mod development team to discuss the current status of their mod for Red Alert 3.

Now before we start with the mod, can you guys tell us something about yourselves?

SighNapse: Sure, I’m 17 years old and have nothing better to do.

R3ven: I’m a 16 year old in my Junior year of High School. I live in Ohio. I work on the Paradox mod as Leader and main coder as well, though as many know I’ve been focusing on getting Synergy done.

Let’s talk about your mod now, what is the Synergy really about?

R3ven: Synergy has mainly become a project of ours to show the in depth details and professionalism we both can get to in game development and thus to help us in the future where we hope to go into the game development industry.

Well, as we can see in the mod there are so many great creations or we should say the whole project is, so how did the idea of this project come to your minds?

SighNapse: I joined a long since dead Red Alert 3 mod in the summer of 2009. After it died at the end of 2009 I found myself left sitting on a pile of unused assets so in the interest of making something out of them I contacted R3ven (formerly Huhnu) about some code. Next thing we know we’re planning Synergy. Ironic that all of those assets that I originally wanted to salvage have since been scrapped…

R3ven: The origins of Synergy are, as many people guessed when we started the project, an RA3 mod that died called Resurrection. Where we started working together was sometime in April 2010 when SighNapse PM’ed me and asked if having Ore Nodes and Ore Fields at the same time was possible. And the rest is history.

What do you think that makes the Synergy so unique, what are the difference comparing to the other mods?

SighNapse: For Red Alert 3 and much of the C&C franchise in general, other mods are remakes, total conversions, pick n’ mix and new and original faction additions. We on the other hand bring forward and develop a classic faction from a previous title in the series.

R3ven: I personally think that what makes Synergy unique is not the ideas behind it, as a Yuri Mod and how there are so many Yuri’s Revenge mods out there that it’s almost a bland idea now, but our own touch to making Yuri detailed. SighNapse has almost hurt himself in creativity in making some of the units and buildings. It only takes a few minutes to think of how we can fill a role in the faction without just taking the idea directly from Yuri’s Revenge.

So how did you first come up with your new style for Yuri?

SighNapse: I found myself watching Battlestar Galactica, The Plan again and within five minutes I found myself modelling what became the Bio Reactor without even thinking about it. Then it evolved from there…

Are there any main goals behind this project?

SighNapse: Get it done and get it done right, then use it with Frontline to help me get into the industry.

R3ven: My main goal behind Synergy is, as I stated earlier, to help me get into the game development industry.

There are always bumps in the road, but did guys face any within the development?

SighNapse: In late 2010/early 2011 we had a long hiatus in which I grew increasingly displeased with our existing assets and direction. Bringing myself back around into shape and getting back on track was the biggest speed bump we have faced.

That aside, I had to get the hang of making collapse models, setting up contact points and damage textures. In other words, things blow up into rubble when they are destroyed, buildings have explosions when hit and assets look like they’re about to fall apart when damaged.

R3ven: Yes, we did. Many of the bumps consisted of an idea just needing scrapped, but there was a point where Hexagon almost dissolved, though I’m not really going to talk about it. The usual reaction to that former was just to sit down again and try to think of a way to replace it.

Are you working on something big for the mod?

R3ven: We are working on something pretty big behind the scenes, and we have dropped some hints to it. Let’s just say that Synergy isn’t going to be a purely multiplayer mod.

Well, most of us know that you’re working on another Mod that is called the Advance Wars: Frontline, can you tell us something about it? And are you working on any other projects or even planning to?

SighNapse: People complain that EA ruined Red Alert and made the series “cartoony” thus terrible. Challenge accepted, in Synergy we have proven that given the right lighting and post effects, we can make Red Alert 3 “serious”, now how about we do the exact opposite and take the “cartoony” style further!
So Frontline was born. It’s a total conversion for Red Alert 3 that turns it into a slow paced, real time strategy version of Advance Wars on the RNA engine. Be sure to check it out if you have a copy of Red Alert 3, though it must be said our current beta is out of date and pretty much everything mechanic wise has been overhauled as have the terrain and maps. Afterwards I don’t really know. I doubt we will be modding the new C&C. I’d like to try something else new.

R3ven: Frontline is pretty much the opposite of Synergy. While Synergy is there to create a detailed faction to match the vanilla RA3 factions, while on the other side of the spectrum Advance Wars: Frontline is there to create an even cartoonier atmosphere within RA3. Frontline works just how Advance Wars and Advance Wars 2 worked on the Game Boy, with the main difference being Real-Time vs Turn Based. We have had some ideas, such as combat locking, to help smudge that line(and balance) but they’ve yet to be tested in the slightest. I work on Paradox as I stated earlier, but SighNapse and I have not planned any mods past Frontline and Synergy, and we probably won’t unless something just super special awesome happens.

This question is actually one of the most important ones for the fans and followers of your project, when will you guys make the big release of it?

SighNapse: I can’t really say. What I can say is that 99% of the art assets are done. All that’s left are some animations and general polish.

R3ven: For the longest time we’ve been linking back to a video we created for all mods, maybe some of you even know about it, the When It’s Done video. But we’ve come to a solid idea for the release. If we haven’t released it in Q4 2011, then Q1 2012 should be the release. These aren’t perfect, so don’t hold me to these words as we’re both back in school now, but if neither of those don’t hold up then Northern Summer next year is the time, and I guarantee that.

What does the community exactly mean to you?

SighNapse: Define community; if we mean the EA sucks bridge then next to nothing, they have their opinion set in stone. If we mean players that actually play games and participate in events and discussions as well as give real feedback then they mean much more!

R3ven: It really depends on how they act. A lot of people can be divided into one of two groups, complainers and encourages. Encourager’s are the people who are there if you can’t think of any ideas and want some input. Complainers are the people that repeatedly ask for a release or ask for beta testing. And by beta test they mean just play it and never give any feedback.

There is a big buzz around the community on how the next C&C game will be, so what do you guys think?

SighNapse: I hope it’s a new universe that allows for a mixture of “classic” C&C as well as the crawler system although I haven’t really joined in on any hype just yet.

R3ven: When it gets announced I will probably make an opinion about it, but I’d rather not speculate on it.

Lastly, is there anything you want to tell the community and your fans?

SighNapse: You have something I lack, patience.

R3ven: I don’t have much to say besides thank you for staying with us this long, and if you can hang on for a bit longer you’ll have some good, in my very biased opinion of course *wink*, mods to play.

Thank you guys for being here with us, it’s been a great pleasure, so good luck SighNapse and R3ven and see you later.

Find out more about the Red Alert Synergy mod by visiting http://www.moddb.com/mods/red-alert-synergy