On Friday, Nyerguds and I arrive in Cologne by train. After dropping the luggage at the hotel, we quickly head out to the Koelnmesse where GamesCom is being held. Because of our multi-day trade visitor tickets, we do not have to queue at the entrance. On the convention floor is a big stand of EA for Battlefield 4, Titanfall, The Sims and Command & Conquer. There’s a tank in the C&C area, with its double barrels pointed directly at the mech of Titanfall. C&C fires its barrels, and the titan falls?

The normal people visiting GamesCom have to queue for hours to be able to play games for about 10 minutes. Luckily, the CommandCom attendees have access to the EA community lounge, where a special room with 10 machines has been set up specifically for us. Every now and then you would have to wait, but I was able to play 5 games on Friday alone. His first two games were skirmishes against the easiest AI opponent with the APA and China, and his third game was with GLA against a more capable AI opponent. He explored the tech tree by constructing everything. He did miss how to use the support powers that certain units provide though, so no paratrooper reinforcements even though they are in the game. Gameplay footage of those 3 skirmish matches has been recorded. An edited version of it will be posted on CNCNZ.com in the near future. Mind you, the tech tree is still under revision. It is going to be simplified somewhat in places, and made more balanced in other places. Right now, for one of the factions it feels like you need to construct an additional tech building for each new unit, but the developers are fully aware of this and working on it.

One thing you should know is that we at CommandCom got to play a very special build were the balance has been changed significantly compared to the current alpha builds. The speed of construction and units has been increased to give the game a more fluid feel. Now, I hadn’t played any alpha build of the game before, so there was nothing to compare with. All he had to say on this topic was: it sure feels a lot like a Generals game, but without having to wait on having enough money all the time. It could be that the income stream and unit prices still have to be adjusted further, but overall it feels good.

At the end of the day we had a meet and greet with the developers. Present were Tim Morten (development director) and Bryan Farina (producer). They gave a presentation on what has changed already in the current alpha of the game based on player feedback, and what they are planning to change in the near future. For example, they removed some of the civilian buildings on maps and made roads wider so you don’t get “choke-points” where two armies battling it out can’t get to each other because the road is too narrow. And apparently, there used to be a secondary resource in the besides money: oil. This has now been changed, there is only money and oil derricks are available like in Red Alert 2. However, one important change is that now you construct the oil derrick yourself, so destroying oil derricks is no longer a way to deny your opponent funds for the whole game, because they can be rebuilt.

The developers plan to release monthly updates with new features for the foreseeable future (which include engine updates to support e.g. unit crushing), and in addition there will also be balance patches inbetween (which are simpler to roll out). There’s many things discussed during the meet and greet and the rest of CommandCom, here are some bullet points:

After the meet and greet we go for an evening boat cruise on the Rhine river. It is the exact same boat as 4 years ago for CommandCom 2009. Back then we had Joe Kucan to act like a supermodel, having his picture taken with everyone. This time the boat trip was a bit more relaxed. After cruising up and down the river for 4 hours, interrogating the developers for all this time, we’re back in the city centre of Cologne. We walk back to the hotel for a good nights sleep.

In the morning, Nyerguds tries to lift Melonie Mac (one of the three presenters of the EA C&C hour videos from GamesCom) onto the tank on the Command & Conquer stand. As soon as they do people come to stop them, but it makes for a nice photo. During the day we play more C&C and the day ends with a feedback session about the game. Most of the developers have already flown back to Los Angeles, so Eric Krause is holding down the fort to collect our feedback. He also announces that as we get closer to release, his team will grow and he introduces us to Jason Kokal, who will be the community manager for Command & Conquer and handle communication with fan sites from now on. He comes from the Quality Assurance team at Victory Games. He started working on C&C during one of the patches of C&C 3. He worked on the balance team under Greg Black for Red Alert 3. He’s been playing C&C games ever since Tiberian Dawn. He’s a fan of Nod. 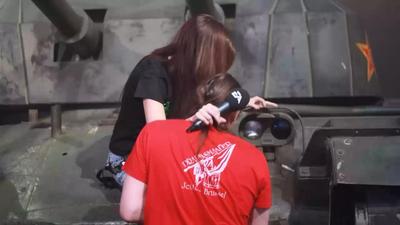 Things that came up in the feedback session

During the evening EA organized a ‘beach’ party next to the river Rhine. It was actually an artificial beach and had a sort of beach club vibe to it. I managed to get some beers at the wedding party that was also being held at the same venue in another tent, before finding out that those people actually weren’t from CommandCom.

After the beach party we went back to the convention center and visited the Sony GamesCom party: free beers in a big party on the convention floor. The music was incredibly loud and you have to respect the people who clean up all the stands between 3am and 9am so the convention can continue on Sunday!

Overall, it was great to visit CommandCom, play the next Command & Conquer game, meet many other people from the C&C community and Victory Games. And we would like to thank Eric Krause and Victory Games for having us!