This article will examine some of the more powerful weapons from Command & Conquer, including the Particle Cannon, Orbital Strike, and Vacuum Imploder.

The Particle Cannon is a superweapon deployed by the USA in Generals that supposedly fired a high-energy particle beam up toward a satellite in orbit that reflected the beam off a mirror and back down to the unfortunate target that in most cases, aside from Command Centers, was doomed to a quick and fiery destruction.

Particle beams are real and come in many forms. In fact, an ion beam is a type of particle beam, meaning that the Ion Cannon satellite could also be referred to as a Particle Cannon.

Real particle beams have not yet been fielded as weapons, but they are being researched and have potential as weapons or anti-missile protection. They function by accelerating sub-atomic particles near to the speed of light. Although the particles have very little mass, they have tremendous kinetic energy due to their speed. A particle beam weapon would not penetrate very deeply into the target, but would rapidly burn away the surface, no matter what it was made from, making it nearly impossible to defend against.

The most unusual aspect of the Particle Cannon is reflecting it off a mirror in space. Particle beams are normally directed by deflection with magnetic fields, not reflection with mirrors as lasers are. Since particle beams are essentially kinetic energy weapons, reflecting the beam doesn’t make any more sense than a device to reflect a bullet or tank shell. In fact, should such reflective technology exist, it would be more useful as a shield against the weapon.

Sending the beam all the way up into space and all the way back down again will also force it to pass through a large amount of atmosphere, which will degrade the beam as the low-mass particles collide with the gasses in the air. Ideally, particle beams should be used within a vacuum to reduce such collisions as much as possible. For a ground-based weapon, it isn’t possible to avoid the air, but that does mean its range would be limited and passing all the way through the atmosphere between the surface of the Earth and space, twice, is very impractical.

Positioning the weapon on a satellite already in space would reduce the atmosphere it would have to pass through by half as well as eliminate the need to reflect the beam back in the opposite direction it came from. This means that the harder science fiction Ion Cannon of the tiberium universe actually makes better sense than the more “down to Earth” Particle Cannon of Generals.

The Orbital Strike support power of GDI in Tiberium Wars is based on a real conceptual weapon. None of these weapon platforms actually exist yet, but they would not require any technological advancements to exist. The only significant obstacle to deploying these kinetic orbital bombardment platforms would be the extremely high cost in putting that much mass into space.

The device is actually quite simplistic, it only consists of solid cylindrical tungsten projectiles weighing about 8165 kg (18000 lbs) that would be dropped from orbit. A trajectory for the falling projectile would be calculated that would likely be quite accurate and it would arrive at its target in only a few minutes after leaving the orbital platform. There would be virtually no way to defend against the high-speed projectile and little time to react even if there was some sort of countermeasure.

The kinetic energy from the mass of the slug combined with its impact velocity of around mach 10 would be sufficient to cause an explosion nearing that of the most powerful non-nuclear weapons.

Since space travel technology of GDI is more advanced than the current world, it seems reasonable that lifting the heavy bombardment weapons into orbit would be no where near as costly as it is now.

The most unrealistic aspect of the Orbital Strike is that it is not destructive enough, especially since it drops more than one projectile. 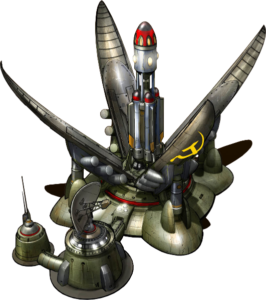 Without Einstein to influence the development of nuclear bombs, the Soviets of Red Alert 3 had to employ a different superweapon instead, the Vacuum Imploder.

Vacuum bombs are real, although that is only a misleading nickname, they are properly called thermobaric weapons.

So what do thermobaric weapons have to do with a vacuum bomb? They heat up and expand so fast that as the exploding gasses start to cool and contract, it causes a low pressure rarefaction to appear behind the pressure front that can pull the explosion backwards. This can cause more oxygen to be drawn in and fuel the explosion to grow again, which may turn into a piston-like expansion. All of this happens quite quickly, however, and there is certainly no sustained vacuum or implosion effect. It is also something that is more likely to happen in closed spaces, like cave tunnels, rather than out in the open.

Even if it is assumed that the Vacuum Imploder is a different technology than a thermobaric weapon, there is no way a bomb could produce a sustained vacuum. As soon as it draws material in, the vacuum is lost, as it has nowhere else to go. This brings us to an interesting conclusion, as with the Ion Cannon above, the very science fiction and alien Rift Generator is actually more realistic than the Soviet’s Vacuum Imploder.