In this article, we will examine lasers and the closely related prism technology of the C&C universe to see how realistic they are when compared to real life.

Lasers and prisms feature quite frequently throughout the series, only those that inflict direct-damage and can be constructed by the player will be covered. 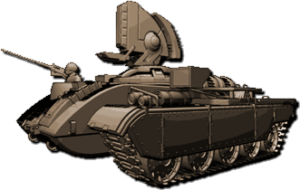 The first thing to scrutinize should be what exactly the difference is between prism/spectrum technology and conventional lasers. The very large prism crystals visible on these devices would not be necessary on lasers, so it is clear they are not the same type of technology.

Lasers use mirrors and lenses to collimate a light beam, ideally putting its focal point at infinity (perfect collimation is not actually possible). Plausibly, prism light could be focused into a narrow cone, concentrated on a single point. Using cones of light instead of a laser beam could result in several differences in how the weapon would function.

One notable disadvantage of laser weapons is what is known as thermal blooming, where the atmosphere absorbs a small amount of the laser energy passing through it and heats up, causing distortion and reducing the effectiveness of the beam. Particles in the air, such as smoke or dust, can amplify the problem. If prisms focused light in a cone, they could avoid causing thermal bloom. However, prisms would be far more vulnerable to physical attacks and have significantly shorter range. An array of multiple lasers focusing on the same point could more or less achieve the same result as a prism and such a technique is in fact used by real laser weapon systems.

Using less-concentrated beams of light, the power-up feature of prisms could be plausible, as beams too highly focused could damage the prism crystals themselves. However, Einstein’s explanation of their function during Operation: Liberty is a bit contrived. “When prism tower X – it is placed close to prism tower Y – the energy produced by the centered tower will be increased by a factor of X over Y times 2,” gives us the equation X/Y*2, since X and Y would both have a value of 1, we wind up with 1/1*2=2.

The beam-splitting effect from Prism Tanks and Tiberian Twilight’s Obelisk of Light is completely fabricated, as any reflected light would disperse so quickly, it would lack the energy to cause any damage to secondary targets.

With prisms out of the way, we will shift attention over to normal laser weapons. These have existed in the imaginations of science fiction authors for several decades, and laser technology is quite well understood, so the question arises as to why lasers only show up in very limited military applications.

The biggest obstacle to laser-based weapons is the cost. Many laser projects have been canned within the notoriously well-funded United States military due to being far too expensive, even with promising results. Theoretically, a laser weapon could inflict damage equal to a regular projectile for a miniscule fraction of the cost per shot, but research, development, and production costs ultimately outweigh the cheap cost to finally use it. Additionally, lasers are extremely precise weapons that are not well suited to the harsh combat conditions to which they would be subjected, with maintenance on a laser also being more costly than conventional weaponry.

Another major hurdle is the massive power requirements. A laser with the power required to destroy tanks would require a power plant larger than a tank would be able to carry. Fielding large power plants would just add even more expensive equipment prone to breaking down.

In a scenario where laser weapons would be expected, countermeasures could be employed. Lasers are only light, so they are still susceptible to refraction, reflection, and diffusion. Coatings that defeat or reduce the effectiveness of laser attacks can be applied to potential targets.

Because of the numerous issues with lasers, those in real life are mainly relegated to anti-missile roles, making the Point Defense Lasers on the Paladin Tank and General Granger’s aircraft perhaps the most realistic.

As a final note, rotating lasers on a Gatling-style weapon is completely pointless, it is adding mechanical parts and rotation with no possible benefit. If you want to have multiple capacitors to allow for a higher rate of fire, just use an internal electric switching system.