Welcome back to the Dev Detector, our feature where we catch up with former Command & Conquer developers, reminisce the good old days and sometimes learn something from behind the scenes from them.

In this iteration that comes on the 21st anniversary of our website (we’re old, we know), our guest is none other than Joseph Kucan, the director of dramatic assets at Westwood Studios (c. 1992 – 2003), best known around the world for his legendary role of Kane, and who is the co-founder and producing director of the Las Vegas theatre company A Public Fit. 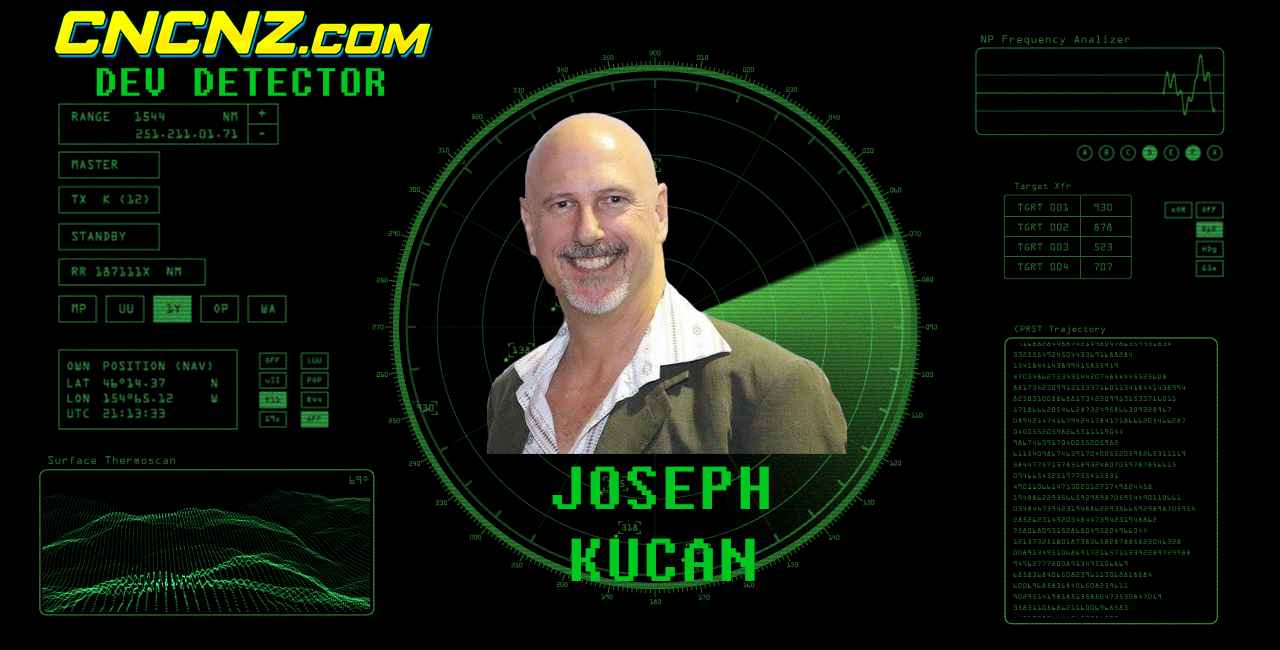 1. You were with Command & Conquer since its start, and the first game recently had its 23rd anniversary. When do you think it stopped being just another title in the studio’s schedule, and started being something unique?

As I recall, it was Thursday, November 10, 1994, right around 2:15 in the afternoon. Westwood Studios President Brent Spenny called me up to his corner office on the 45th floor and said to me, “Johnny,” he said, “Johnny, hitch up your underpants! I’ve just decided that Command & Conquer will cease being just another title in our schedule and will henceforth be something unique!” I was thrilled, mostly because this was the closest he ever got to getting my name right; usually he called me “Tim” or “Brian” or “Stephen.”

2. Looking back at your time at Westwood, how do you feel about the games you worked on there? Did you have a favourite project among them?

I am ridiculously proud of my work at Westwood. I had come from a background in theatre and education with very little experience with technology or gaming or, really, modernity in general. Westwood was very patient with me as I learned the ropes – not only about the basic principles of game design and execution but also the absolute basics of technology. I didn’t own a computer, had never sent an email, had no idea what acronyms like LAN and USB, OS and HDMI stood for. It was a steep learning curve. I think the games speak for themselves. And although my contribution to each of my credited titles was absolutely minimal in the grand scheme of things, I’m always pleased to have my name mentioned alongside the superstars who really put it all together.

3. Obligatory question: how did you get the role of Kane, for real?

I won the role of Kane in the Humboldt County Fair Pie Eating Contest of 1994. I ate 11 strawberry-rhubarb pies in 8 minutes, taking second to Joey Chestnut who set another world record by eating 13. Joey won first prize – a year’s supply of free pizza from Carvelli’s Pizza and Subs in downtown Winnemucca. Second prize was the role of Kane. Woo-hoo!

4. As a director of Westwood’s Command & Conquer and Dune titles’ cutscenes, how large was your influence on the games’ narratives as a whole? Did you make any script edits that would make the story more awesome?

I had more influence on C&C than I did on Dune. Both titles allowed me a certain amount of flexibility when it came to the specific language of characters, but the arc of the stories were mostly determined by the designers. I was a close collaborator, but the ‘plot’ of the games was settled by the Executive Producer and the Lead Designer long before being handed off to writers. They learned very early on to ignore most of my suggestions after I pushed really hard to have the mission briefings delivered to the player through a series of interpretive dances.

5. A lore question: there’s a lot of confusion on the “character” of CABAL from the Nod ending of Firestorm. You did mention the purpose of his bio-tubes, but the very last scene where his voice and avatar are mixed with Kane’s remains officially unexplained. Could you shed some light on the link between Kane and CABAL?

The Nod ending of Firestorm, showing Kane in a bio-tube meant to power CABAL

My recollection is that CABAL was meant to supplant Kane as the primary voice of the Brotherhood in future games. The notion was, I think, that CABAL was principally a collection of human bio-masses and synapses and that once the body of an incapacitated Kane was introduced to that system, Kane’s strong will took dominance over the entirety of CABAL and would continue to influence the Brotherhood from there. It was my impression that the producers were trying to transition from Kane to CABAL, but I’m really not certain.

6. Also on the subject of lore: Kane wore his mask from Tiberian Sun all the way to Act I of Kane’s Wrath. Does this imply that the ion cannon ending of the original Command & Conquer is the canon (official) one?

The Ion Cannon ending is the one we all preferred, so, yeah, I think that one was considered canon by the team. I am constantly surprised that no one ever mentions the Victoria’s Secret Underwear Model Tickle-fight ending.  That one was always MY favorite…

7. At EALA, you came back to play Kane, but cutscene direction was given to Richard Taylor. Was this a relief from combining acting and direction, or did you miss doing both jobs simultaneously?

8. Do people still recognize you on the streets as the leader of the one true organization?

I don’t know. I haven’t left my house without constructing an elaborate disguise since 1998.

9. You’re now at A Public Fit. How have the past four years of the theatre company you co-founded passed? Did the Las Vegas audience recognize your efforts?

We’ve just begun our 5th season as Las Vegas’ only professional theatre company. In that time, we’ve produced 12 shows including 2 world-premiere works, staged 21 readings of “over-looked” plays, created community outreach with story-telling evenings and educational events, and created what we call the “unending conversation” about theatre, storytelling, art and life with our post-show audience discussion events that follow each and every one of our performances. We have a dedicated audience that continues to grow every year. Our theatre space, once an abandoned warehouse in the center of downtown Las Vegas, is being renovated as we speak and once finished, will include a bar, rehearsal space and a blackbox theater and event space.  This last year, our 2017-18 season employed 5 different directors, 39 individual performers (including 5 Actor’s Equity contracts) and a staff of 19 supported by 35 essential volunteers.  Our APF family continues to grow and I couldn’t be prouder of the hard work we’ve accomplished. Your tax-deductible donations gratefully accepted at www.apublicfit.org!

10. Most of us are quite far away from Las Vegas, but I’m sure there are fans who wish they could see A Public Fit’s plays. Have you considered recording some of them, or touring elsewhere?

The licensing agreements necessary to produce theatre precludes us from recording the shows for broadcast. And the market for touring productions is this and very competitive. For the foreseeable future, I’m afraid the only way to see an APF show is to come visit us in Las Vegas. But I’ll tell you what: use the promo code KANELIVES and receive a $5 discount on your ticket price! It’s not a year’s supply of free pizza, but 5 bucks is 5 bucks…

11. How does directing choreography for special effects-aided video games and that for theatrical plays differ, and which do you find harder?

Theatrical choreography must be safely replicable over and over and over again, as performers must be able to consistently perform over the length of the run of a show. In mo-cap or video, we just have to be safely awesome ONCE. Theatrical work is harder for me since the audience is already experiencing a certain level of disbelief in the live experience.

12. Have you considered acting, voice acting, or directing other games, TV shows, films?

Yes, I have considered it. I spend the better part of each and every morning staring at my phone, encouraging it to ring with offers of fame and fortune from other games, TV shows and films.  I’m always surprised when those offers DON’T come.

13. What do you think of the C&C games made when you were not involved (Generals, Zero Hour, Red Alert 3, Uprising, Tiberium Alliances, Rivals)?

Truthfully, I know very little about any of them. Although I DO have to admit being a little envious of not getting a chance to work with the cast of RA3. I mean, come on: J.K. Simmons?  Jonathan Pryce? Tim Curry? Peter Stormare? George Takei? COME ON!! And I have to admit that I’m cautiously hopeful that C&C will find a successful market in the mobile arena.

14. The C&C Rivals character art style received a lot of criticism, in particular all appearances of Kane. How did you react when you first saw them?

I’ve been told that those are just placeholders until they can successfully shave an orangutan and get it to pose for photos. Let’s face it – that’s really the only way that they’ll be able to capture my true essence!

15. We’ve recently witnessed an official announcement for a Command & Conquer remaster (we don’t know which game(s) will exactly be remastered yet). Is there anything you personally would like to change in the games? Would you like to get involved in some way, if you already aren’t?

Boy, that seems like a massive undertaking! I’m not sure that the original source material for all the games is actually available. A lot of that stuff existed principally on digital tape back in the day. There might be an edit or two I’d like to take another look at. And I don’t think the obvious love story between Kane and Kilian Qatar was explored with the sort of enthusiasm I felt necessary. But seriously, I understand the desire to recreate and relive the seminal moments that C&C provided to some game players, but I honestly think that in some cases, the memories of those moments will just have to suffice.

16. Which games, if any, do you play to unwind in recent times? Do you still fire up a C&C or Dune game for old times’ sake, or follow community sites and projects?

I’m not much of a gamer, actually. From a story-telling perspective, I really enjoyed the Bioshock games. And I thought that the Dishonored series created a hell of a world. But those are already pretty well-known and mainstream. I’m embarrassed to admit I have no surprises to offer. I hear Angry Birds 2 is very compelling. But I never played Angry Birds 1 so I’m afraid I’d be lost…

17. Are there any messages or comments you would like to send out to the community?

Thank you all for continuing to feign interest after all this time. The way you all keep pretending that I’m famous and interesting – that’s a really good prank on me and say what you want, I love a good joke! Please take care of your teeth; you’ll thank me when you’re older. And remember: here in America, and I can’t stress this enough, THE LEFT LANE IS FOR PASSING.

We would like to thank Joseph Kucan for his time, as well as all his contributions for Command & Conquer both on and off screen! If you’re in the Las Vegas area, the new season of A Public Fit‘s plays is starting, so drop by and show your support for Joe!