Welcome back to the Dev Detector, our feature where we catch up with former Command & Conquer developers, reminisce the good old days and sometimes learn something from behind the scenes from them.

In this iteration, our guest is Eric Gooch, former artist at Westwood Studios, who has worked there from 1992 all the way to its 2003 closure, and is currently a freelance artist working for Bend Studio. He’s best known to the community for his role as Seth in the original Command & Conquer. 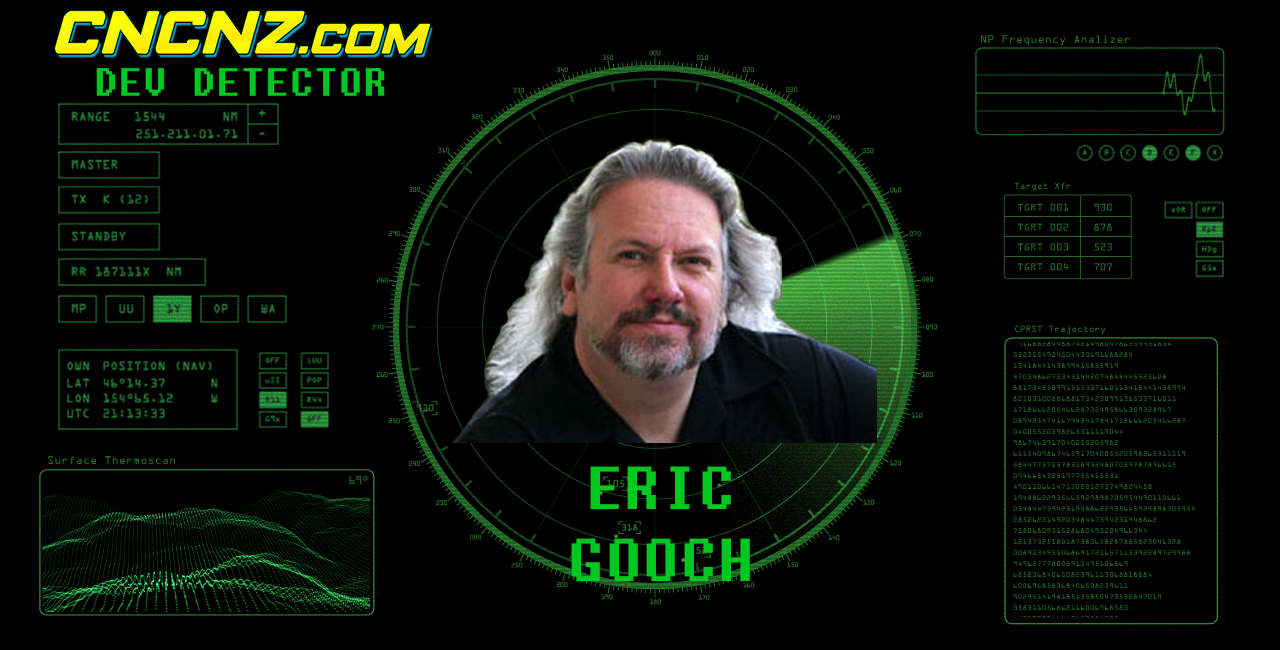 1. You were with Command & Conquer since its start, and the first game recently had its 23rd anniversary. At what point did you realize that you were working on something special and with hit potential?

I’m not sure how long it took, really. We knew the game was popular, and people liked it, but it probably wasn’t till later on that I realized it was as popular as it had become. I think a lot of times the people that are working on games don’t really know that much about the popularity of a game, as we’ve got our “noses to the grindstones” and are working on the next thing. We get occasional bits of news (hopefully good!) and hope people like what we’ve created.

2. Looking back at your time at Westwood, how do you feel about the games you worked on there? Did you have a favourite project among them?

I worked on a number of games there, but the C&C universe was a favorite of mine for sure. Tiberian Sun, Red Alert, and Renegade stand out for me I think in some ways. I’m pretty happy with the way they turned out overall, and am glad people enjoyed them.

3. How did the process of making unit/building/background element go on average? Did you take external inspiration (apart from the licensed titles, of course)?

I spent a lot of time working on cinematics, and would frequently start by building high-resolution 3D models. Later, we would create lower resolution versions for the game engine. There was usually reference art to start from for vehicles, buildings, and infantry. So there was a lot of going back and forth between in-game models and cinematics, and trying to stay true to the concept art. There were exceptions though… I think I made up Nod’s Devil’s Tongue Mk. II.

4. How did the character of Seth come to be, and how did you get cast for him?

That was funny. I worked a lot with Joe Kucan, and he was in my office one day describing a sequence for a cinematic. We would go over the shots before we would film against the green-screen in the studio. So he’s telling me about a shot, and says “…then we see Seth, and he… oh crap.” “What?” I ask. Joe says: “We forgot to cast Seth.” Then he looks at me. “You could be Seth.” Me: “What?” Joe: “Do you want to be Seth?” Me: “Sure!” So that was settled.

5. Supposing there weren’t any internal issues in Westwood and EA, how do you perceive the series would have evolved? How would the projects that the team planned to do, but never got the chance, have fleshed out (e.g. Incursion, Continuum, Renegade 2)?

Well, we were in the process of working on the next C&C game [C&C 3: Incursion] right before everything fell apart in the Vegas studio. It was looking pretty cool. A more realistic look to the graphics, updated engine, aliens. My memory is fuzzy, but I recall that some bigwigs were considering cancelling it, but changed their minds when they came out and saw it. It was looking cool. Previous to that, Renegade 2 was looking great too. I remember watching testers play it, and you could fly a Kirov airship and drop bombs on Apocalypse tanks. It had some nice environment art going on too. Alas, it was cancelled. I think it had been the first Westwood game that had been cancelled during production. People were pretty depressed about it.

6. After Westwood, you worked for Insomniac, Crytek, Psyonix, and 343 Industries. What were your experiences like there? How hard was the transition to a non-RTS world?

I don’t think the transition was difficult, really. RTS games are a lot of fun to work on, and I’d love to work on another one in the future, but I also enjoy the challenge of learning new tools and engines, and being able to have the variety that different types of games bring to the table. Insomniac was a good example of that, as we would alternate between the bright, cartoon-like feel of the Ratchet and Clank games, then switch over to the dark, gritty feel of the Resistance: Fall of Man titles. Crytek was my first experience with the CryEngine, and deferred lighting with no baked lightmaps for the title Ryse: Son of Rome. (And it was also a great excuse to live in Germany for a year, which was great fun!) Psyonix is in San Diego, one of my favorite cities, and was my first experience with the Unreal Engine. And 343 was working on Halo 5, which was great. I have been fortunate to work with great teams wherever I’ve gone.

7. Can you tell us which game(s) you are currently working on, what you are doing for them, and when can we expect to try them out and see your work?

I am currently in Bend, Oregon, working for Sony on the upcoming Days Gone for the PlayStation 4, once again working in the Unreal Engine. I’m a Lighting Artist, and lighting has been my specialty for the last 10 years or so. You can see more about Days Gone at https://bendstudio.com/games/days-gone/

8. As a freelance artist with lots of interesting pieces to show, did you have any features in galleries, and where can one see them?

I try to keep my websites up to date. My sci-fi and fantasy work can be seen at Cybergooch.com, my game-related art at Goochvision.com, and my architectural work at Archiluma.com.

9. Has the way of creating game-specific art changed since your early days, and is it harder or easier for newcomers to take that up as a career?

Things have changed quite a bit over the years. In fact, that’s one of the interesting things about the industry, as it keeps evolving. When I started in 1992, there was no 3D in games, or at least very little. We used programs like Deluxe Paint and were basically pixel artists for games like Lands of Lore. 3D came a bit later, and I was pretty much hooked as soon as I saw what could be done with it. That’s what I’ve been doing ever since.

As for “harder or easier”, it’s a little of both. On the one hand, it’s a little harder because there are so many people who would like to get into the industry, which means more competition. On the other hand, there is a vast amount of information on the internet to help people learn about 3D and creating game art in general.

10. What do you think of the C&C games made after you were no longer involved?

I was always a casual, campaign player, so was never a hard-core multiplayer type, so it’s difficult for me to give a worthwhile appraisal. I have heard mixed reviews from others, but I’m not familiar enough with the games to give an unbiased opinion.

11. The initial C&C Rivals character art style received a lot of criticism. How did you react when you first saw Redwood Studios’ rendition of Seth?

Actually, I thought it was funny. It’s like a cross between me and Ming the Merciless from Flash Gordon. It doesn’t bother me though, I think overall it’s fine, and hey, they brought Seth back! 8)

EA did contact me to “secure my digital likeness” so it’s all above-board too. I’m happy to see Seth live on.

12. Since a remaster of a classic C&C game (we don’t know which one yet) has been announced, what would you personally do in such a project if you were involved? What would you rush to change, and what would you leave how it is?

Hmmm, I’m really not sure what I would change. I guess the first thing that comes to mind as an artist would be a graphics upgrade since game engines and computer graphics in general have evolved so much over the years. Since it would be a remaster, I’m hoping they wouldn’t change the gameplay too much.

13. Hypothetically, if you had the chance to work on another RTS title, would you accept such a project, and what would you want it to be like?

Yes, I would accept, they’re fun to work on. Personally, I’m a turtler, so I like games that allow for massive base-building and defense turrets, etc. Actually, I’m sort of a turret freak… I like any game type that supports turrets. (I usually play the engineer class if available.) So I’d love to work on a title with base building and good defenses.

14. Which games do you play to unwind in recent times? Do you still feel a nostalgia itch and fire up a C&C or Dune game, or follow community sites and projects?

In more recent times I replayed some of the old Warhammer 40K: Dawn of War games, I had fun with those. I also enjoy games like the Van Helsing series and Grim Dawn. I dabble in MMOs from time to time as well. I do occasionally fire up an old C&C for fun, and I still get emails from people who are looking for any additional information they can find as they work on mods or other C&C spinoffs. It’s been great that so many people are still interested in the series! Speaking of which, I had someone point out that the old Tiberian Sun images link was down on my site. I’ve just put it back up, and you should be able to see them again at the galleries page at cybergooch.com.

15. Are there any messages or comments you would like to send out to the community?

We would like to thank Eric Gooch for his time, as well as all his contributions for Command & Conquer and gaming in general! Be sure to check out the websites he linked to: Cybergooch.com, Goochvision.com, and Archiluma.com.